After drying out all the equipment……& ourselves following last week’s match / deluge we were pleased this week to welcome the team & supporters from Galliford Try. The evening’s weather forecast was not good. We had an afternoon of shall we….shan’t we? We then made the decision to go ahead. With the clouds looming overhead the 5 man Galliford team arrived somewhat depleted as some had decided that the match was surely going to be cancelled.

The Coles Grant & Jones team were proudly sporting their new kit this week (see team photograph below) so at least we now look the part. Thanks to Craig for organising & providing the new kit.

With the prospect of rain it was decided that we would play 10 over’s each to ensure a result & if the weather improved then we could extend the match.   The Galliford Try team were elected to bat first & Jonathan ‘Top Score’ Glover & Mike Spragg were sent out to face the Coles Grant & Jones first bowler in the form of Leigh Moore.

Jonathan got the Galliford Try team off the mark scoring a total of 12 runs before being caught out by Geoffrey Stevenson. Unfortunately Mike did not fare so well failing to score during his first session of batting also being caught out this time by Craig Coles.

Taking Mikes place was Brian ‘Full Swing’ Duke who managed to score a single before being bowled out. Quickly replacing Mike was John ‘Holy Batman’ McCabe. John managed to expand the Galliford’s score by another 8 runs before succumbing to the bowling of Chris Tooze. 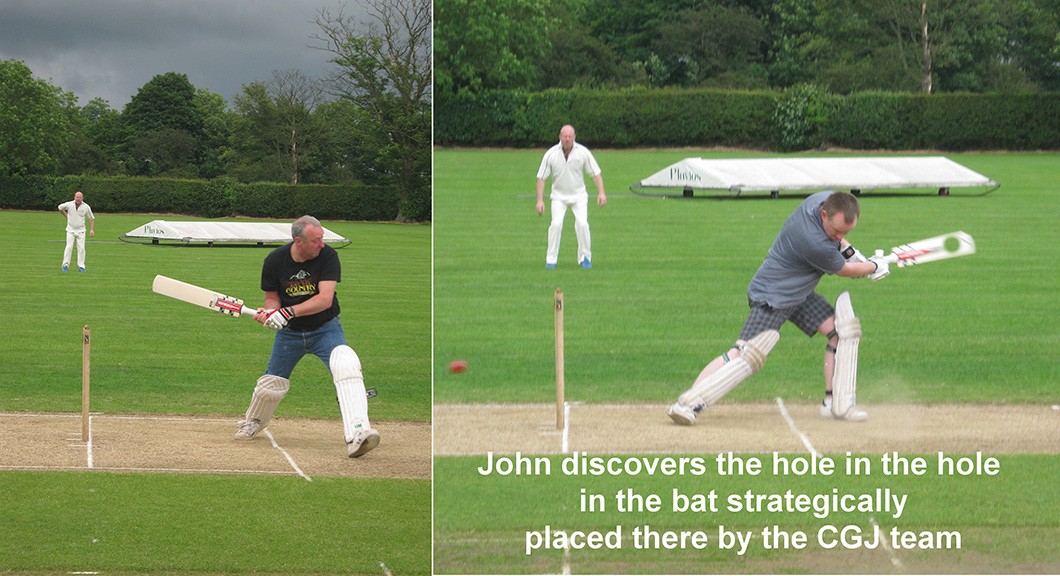 Next making an appearance for the Galliford team was Darren ‘Belter’ Brooks who was the team’s joint second place scorer by adding 11 runs to the total.   By now we were fast approaching the end of the prescribed 10 over’s & Mike made his second appearance but this time managing to equal the second best score of 11 runs.   After the last ball was bowled the Galliford team had accumulated a grand total of 54 runs which isn’t bad for 10 over’s.

The teams quickly changed positions with some members from the Coles Grant & Jones team making the numbers up to 11 for Galliford’s turn at bowling & fielding.

With the target set at 54 runs Coles Grant & Jones sent out the youth element of the team in the form of Alex & Charlie Briscoe.

Getting the Galliford Try bowling off to a start was Jonathan who was followed by Mike. Alex managed to put 7 runs on the board with Chas scoring just 1 more than Jonathan.   The youngest recruit into the CGJ team took up the batting in the form of Craig’s son Alister ‘Young Blood’ Coles who was shortly accompanied by his father. Alister managed to score 3 runs & during the combination Craig managed to score 6 before falling to Brian’s bowling.

Paul ‘Flash Bat’ Ravenhall was called to the crease & gained the honour of being CGJ’s top scorer by scoring a 16 needed runs. 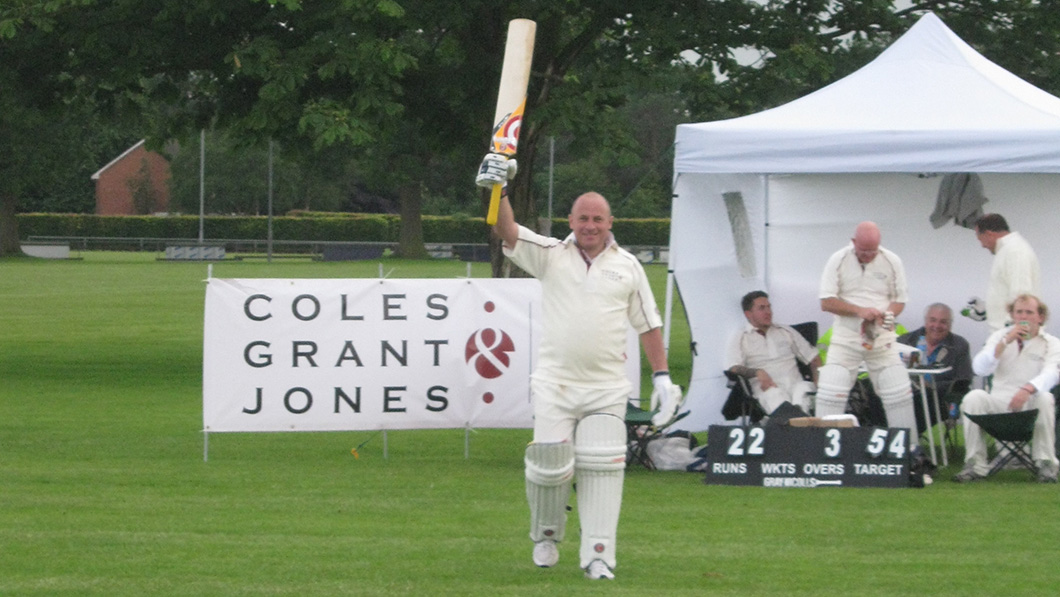 Carl Jones was next up taking over from Craig in partnering Alister. Carl soon became the CGJ’s second top scorer by adding 10 more runs to the sheet.   We were fast approaching the end of the 10 over’ when Alister’s wicket fell & Geoff took his place. Carl & Geoff managed to get within 2 runs of the target & it was all down to the last ball of the match. With the bases loaded Geoff managed to hit the ball & secure a victory for the CGJ team.

As the rain clouds were very much in evidence it was decided to call a halt to the game at this point.

It had turned out to be a very tight match which was very much enjoyed by all participants.

We all decamped to the clubhouse after taking down the shelter & carrying all the equipment back to the car park to tuck into the barbecued food & enjoy a few drinks from the bar.

Our decision to only play 10 over’s each turned out to be a wise one as 10 minutes after entering the clubhouse the heavens opened! At least this week we had escaped without a soaking.

Many thanks to the Galliford’s team for turning up despite the foreboding weather & thanks for making it an exciting & closely contested game. Thanks also go to the Coles Grant & Jones team, organisers, supporters & our scorer Reg ‘The Pen’ James who despite his retirement takes the time to participate.   We hope that the Galliford Try team enjoyed the evening as much as we did & we very much look forward to next year’s match.